History of the Bradley 3 Ranch 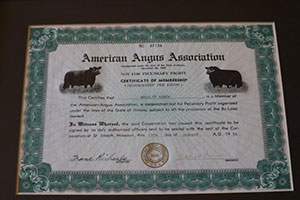 Mary Lou Bradley's Great Grand Pappy, Rufus Jack Bradley, was wagon boss on the famed XIT Ranch in the northwest Texas panhandle. He saved all but one paycheck during 1874-1875 and headed south in an effort to avoid panhandle blizzards. With $1100 in his pocket, he was able to acquire a few acres between the Wichita River and Beaver Creek in Wichita County, Texas. The ranch raised Longhorns, then commercial Herefords. In the early 1950s, with Minnie Lou Ottinger's input, the ranch integrated Angus genetics into the herd by using Angus bulls on Hereford cows-a radical move for a Texas rancher at the time. The ranch expanded their black baldy herd to a second ranch in Dickens County. When Billy Jack Bradley returned from the service, a third ranch was purchased in Childress County. Bill and Minnie Lou were married and, thus, the Figure 3 brand was registered in Texas, representing the third ranch and third generation of Bradleys to ranch in northern Texas. Their commercial Angus herd soon gave way to a purebred Angus seedstock herd in 1958.

In an effort to meet changing consumers' demands, the Bradleys built a beef processing facility in 1986, producing high-quality beef while rewarding ranchers with premiums and information. B3R Country Meats, Inc. produced one of the first branded beef products marketed across the country and has been able to reward ranchers through a value-based marketing system. B3R Country Meats was also one of the original beef processing facilities to produce beef for Certified Angus Beef® brand Natural. B3R's meat plant was sold in October of 2002 to Booth Creek and Bradleys officially left the company in 2004.