A Look Back At Our Time In The Meat Business 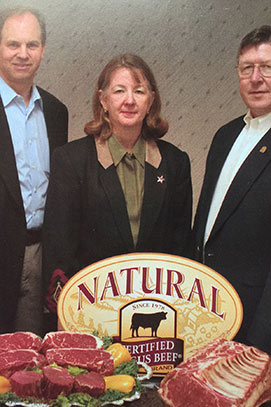 Below are quotes from articles written about B3R Country Meats. The plant operated under the Bradley family's ownership from 1986 until it sold in 2002. In 2002, they harvested 30,000 head. Under their vision, some of the industry's earliest value based marketing was implemented, all natural beef was marketed and they were pioneers for Certified Angus Beef® brand Natural.

"We had been selling locker beef off our back porch since the late 1970s and early '80s. We felt like there was an opportunity there," Mary Lou Bradley said. "Our first mission was to provide beef like we ate at the ranch and our other mission was we wanted to be paid for our product. We thought our animals were better than average and if they were, we thought we should be rewarded," she said.

They were even invited to the Black Tie and Boot Party for President George W. Bush, supplying the beef tenderloins for the party.

"When producers see how much the top third of the cattle make, there is a lot of incentive to get rid of the bottom third and to move the entire group toward the performance of the top third," says Neal Odom. He's manager of McLean Feedyard, McLean, Texas, currently the exclusive feeder for B3R. 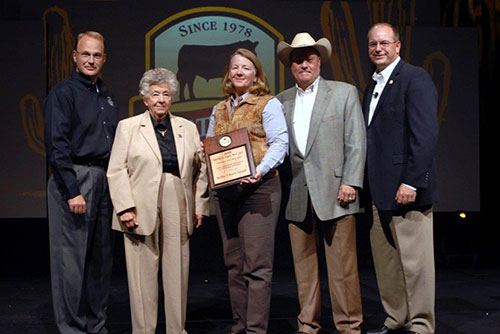 "We're trying to get it to where the cow herd is working for the rancher and not the other way around," says Mary Lou Bradley, B3R president. She founded the company in 1986 with two simple goals: 1) Help ranchers make a living and 2) provide consumers with the same kind of tender beef her and her family always ate at home.

That's not lip service, either. As the fourth generation at the Bradley 3 Ranch near Memphis, Texas, Bradley was looking for a way she and other folks like her could avoid being the last generation on the family ranch.

"There is no silver bullet to any of this. It's a matter of understanding all the dynamics," says Bradley. Rather than build a system that focuses solely on paying carcass premiums, B3R builds long term partnerships with producers, sharing information back and forth that can help everyone in the system make more money. This full-circle approach, she explains, means dissecting the interrelated genetic, environmental, nutritional and economic opportunities that exist in every operation.

Currently, B3R works with 150 ranchers in 18 states. Not bad for an operation that was harvesting seven head per week in 1986. Some time back, B3R passed up 90 head per week.

"So we teach ranchers to look at each cow as an individual investment. Then, when one cow is returning $1,000 and another is returning $500, the decision making gets real easy," James Henderson added.